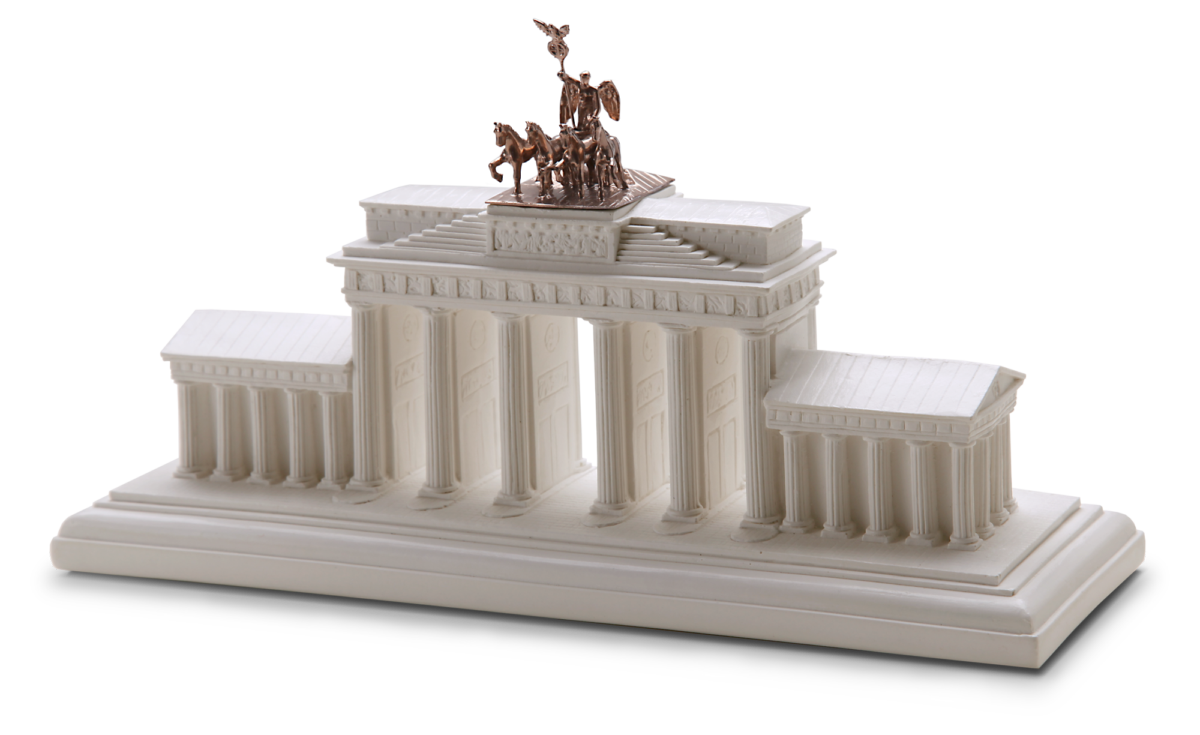 From Alexanderplatz to Zoologischer Garten: the typeface for Berlin.

The city of Berlin has a new alphabet. When the German capital recently received a new corporate identity by Jung von Matt, we designed an exclusive typeface for it. It is quite a challenge for a type designer — especially for a Berliner born and bred — to unite past and present with the city’s diversity and flair. One of the reasons is Berlin’s unique intercultural mix, its magnificent buildings and contemporary architecture, alongside diverse cultural offers and an overall easy-going lifestyle. There are plenty sources of inspiration.

The official type for the city of Berlin

Movement in the city

An observant stroll through Berlin reveals many different lettering styles all over the city. Just take a look at the details on Berlin’s train station signage or on the street signs that are still dressed differently in the East and West parts of town to a large extent. Apart from these examples, lettering on buildings and the architectural change had an impact on the brand new Berlin Type. 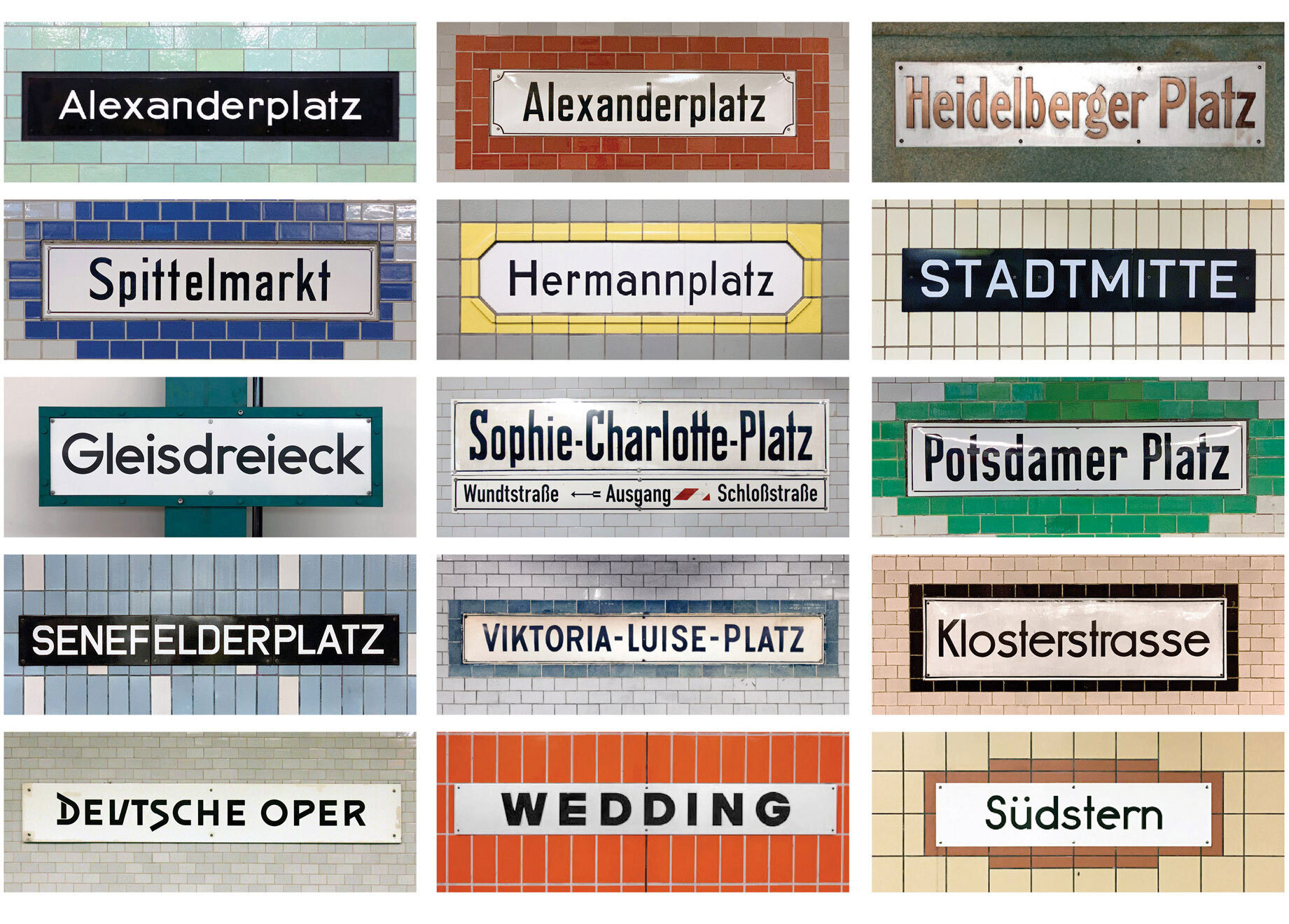 The earliest Berlin underground stations opened in 1902, many more followed during the first decade of the twentieth century. Several stations contain traces of Jugendstil, while stations built in the 1960s and 1979s are children of their time. Many of these very differently designed stations were intentionally preserved and reconstructed — their peculiarities did not vanish during the establishment of a new coherent signage and orientation system in the early 1990s. An underground ride through Berlin is magical: every stop reveals a world of its own. Several train stations feature rather unusual letterings that provided exciting sources of inspiration. Geometric constructions, especially more unconventional shapes such as a »t« with a diagonal terminal as well as that wide »z« had an impact on our designs.

While the lettering style of street names in West Berlin had been applied by silkscreen printing for decades, street signs in the East were milled in layers of plastic. This manufacturing process lent those letters their characteristic rounded corners — a feature also seen in Berlin Type. It was not until the mid-90s that Andreas Frohloff designed a new alphabet for a reunited Berlin. Today all three versions can be seen in the wild. A little later, Verena Gerlach and Ole Schäfer digitised the two originals now called FF CST Berlin West and East.

Lettering on buildings and memorials have left their mark on the face of Berlin. To unfold all of these influence of the past hundred years, we spent hours going through historic photographs. Special thanks go out to the experts of the Stadtmuseum Berlin who provided plenty of photographs from their collection.

The Roaring Twenties are an era of economic growth and blossoming of art and culture in Berlin. During this time the city became a cultural centre, notable in fine art and literature as well as in architecture — not least in unique neon sign lettering. Some of these letterings followed the characteristics of art deco. This style preserves an elegant expression through selected materials, devotion to color and sensuality, and is most apparent in letterforms that feature either an extremely high or low waist: quite prominent in the low bowl of the »R« in »Reisebüro« as well as in »P« of »Kempinski«. To this day such letter extremes are connected to Berlin. 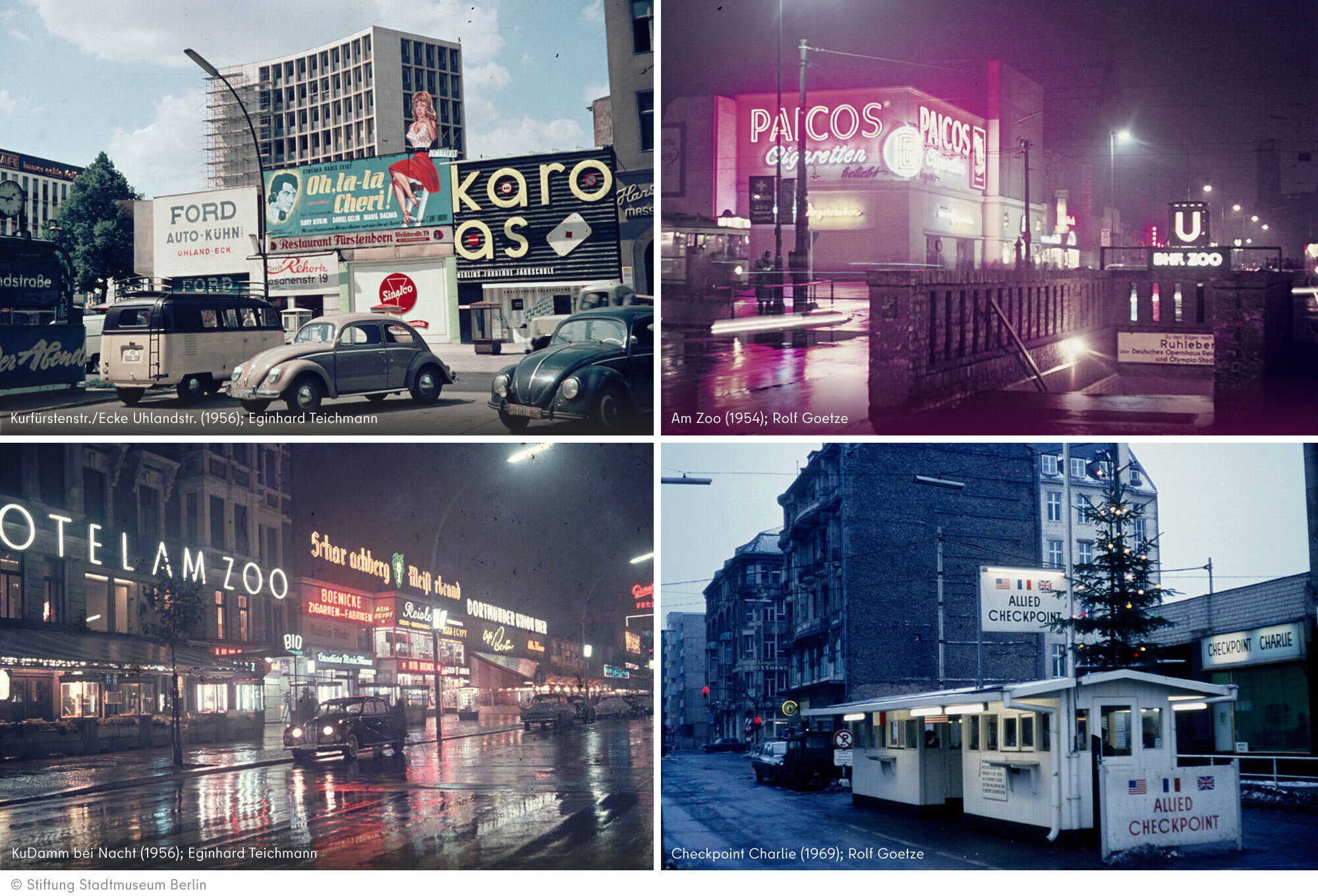 After reconstruction in the 1950s and 60s large billboards and letterings of Berlin brands marked the city-scape once more. Many of those were manually constructed or painted on the facade, lending them much character. The one-eyed »a« is rather prominent next to the condensed »s« in »karo as«, an ad on the corner of Kurfürstendamm and Uhlandstraße (1956), or the rhythm of wide and narrow letters in »Checkpoint Charlie« (1969): just have a look at the wide shapes of »C« and »O« side by side the more elegant and slim forms of »L«, »E« and »H«. Many of the impressive neon signs have vanished, but can be admired at Buchstabenmuseum Berlin.

Berlin Type lives for the present

We have picked up on many of the discovered influences in the design process and mixed them with our present, contemporary understanding. In contrast with those simple construction techniques of sign painters, Berlin Type is drawn on a delicate grid, precisely by every pixel. The characters are optically adjusted in harmony with one another so they withstand text in small sizes and maintain a pleasant rhythm while reading.

↑ Currently the weights regular and bold cover all typographic basics.

↓ The recognition factor of the typeface and therefore with Berlin is essential. Certain characters lend Berlin Type originality and make it easy to identify.

In relation to its ascenders and descenders Berlin Type has a large x-height. It improves legibility and helps with type-setting.

All characters have slightly rounded corners. Despite its straight anatomy, the result is a warm and friendly face.

The double-story »a« is a great alternative for text in small sizes. You may select it through Stylistic Set 01 in the OpenType menu.

In addition to a character set that covers all European languages, Berlin Type offers plenty of typographic treats: numerators, denominators, currency signs, arrows to support use in public buildings. 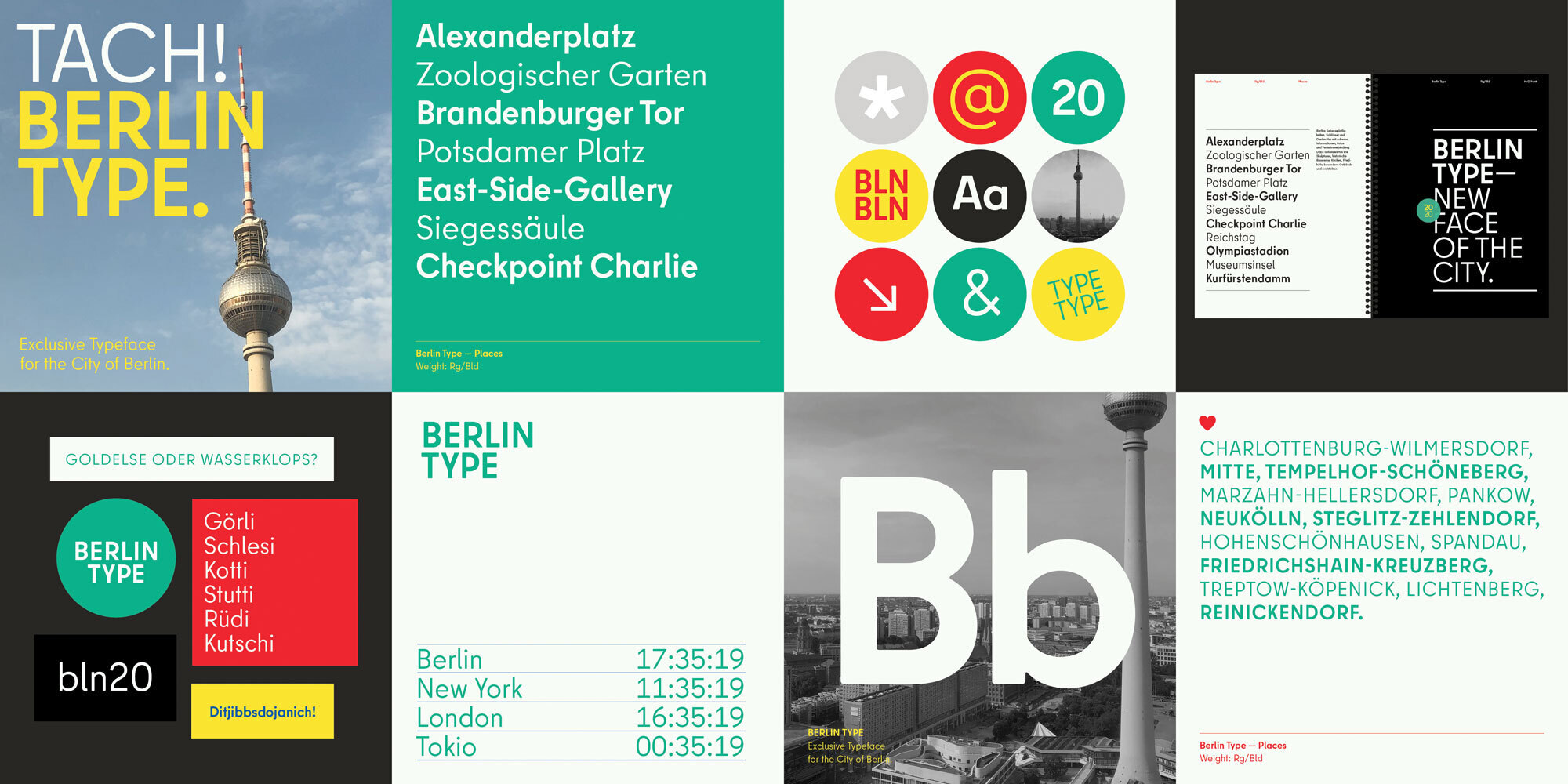 The type for Berliners

Only when type is in use it really starts to live. Berlin Type is meant for a wide audience and ought to represent Berlin in all kinds of user interfaces (print and digital). Its contemporary look is present in its visual expression, in its scope and its overall performance. The regular and bold weights are available to all and can be downloaded for free from the campaign website: wir.berlin. 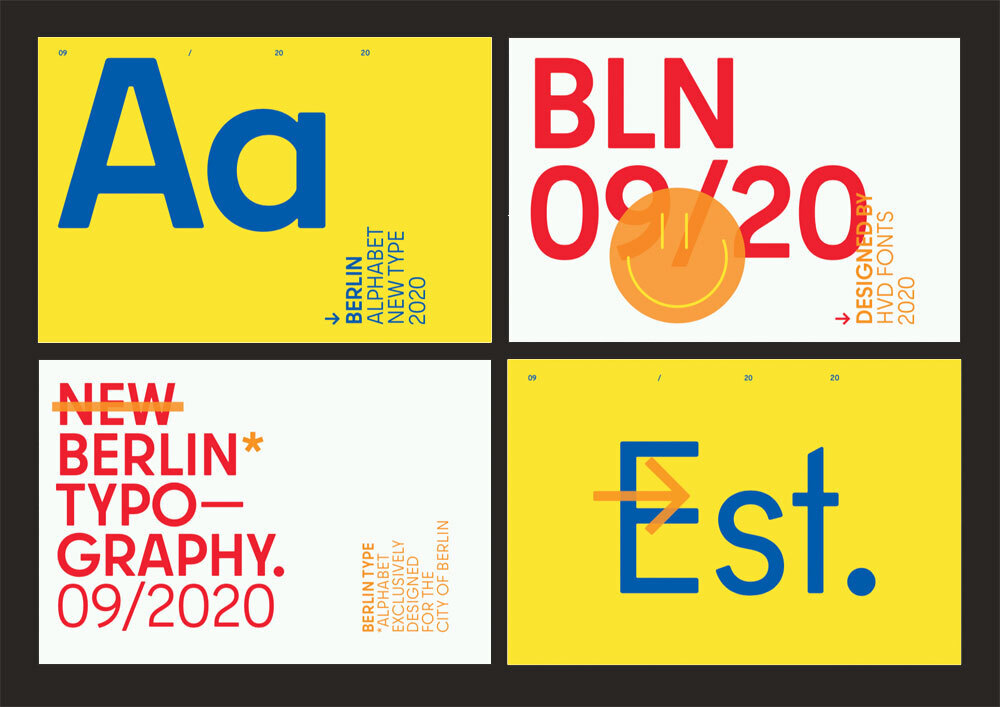 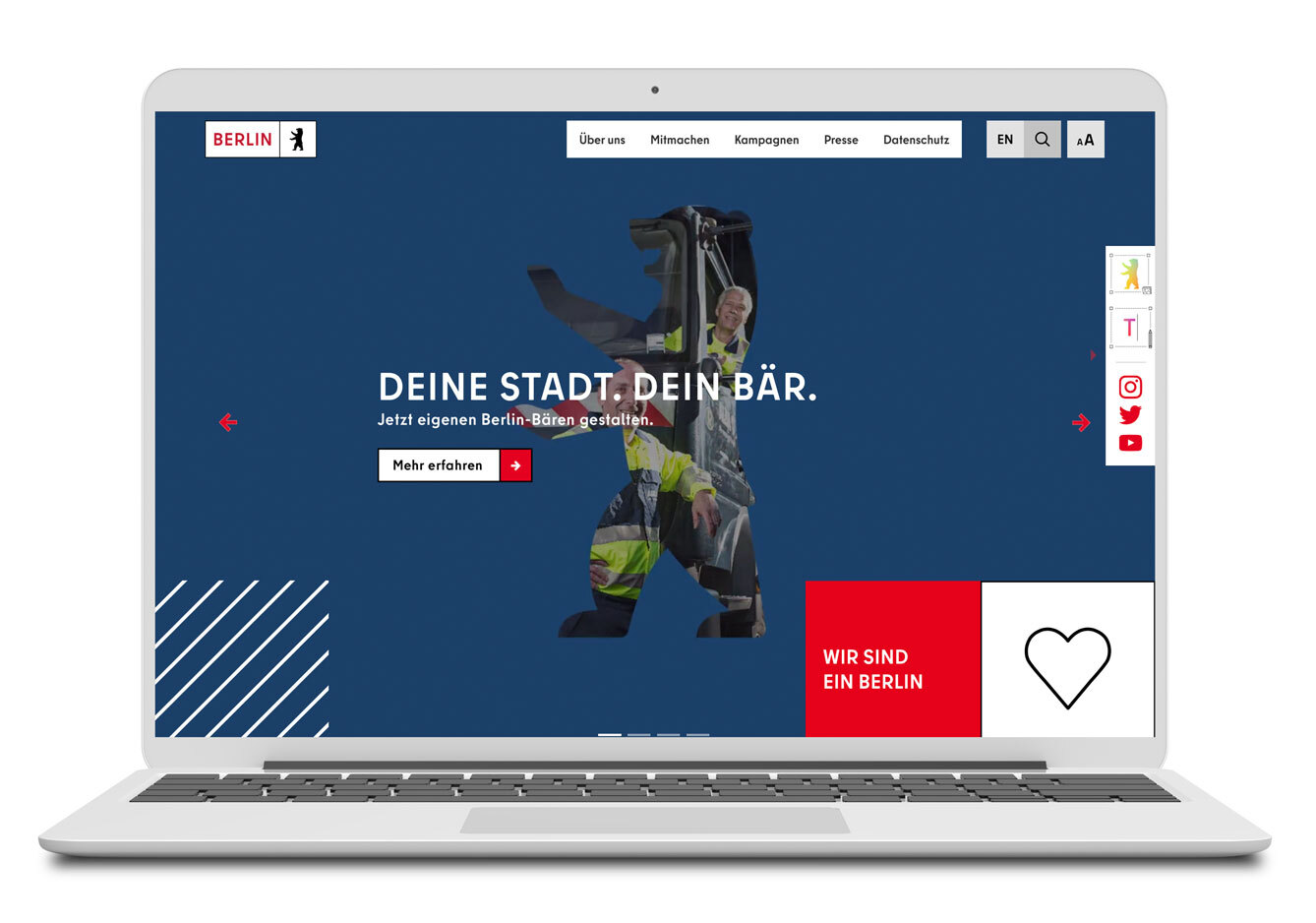 Berlin Type is ready for use in all kinds of digital media. The fonts are hinted manually and thus offer and sharp performance on every screen. 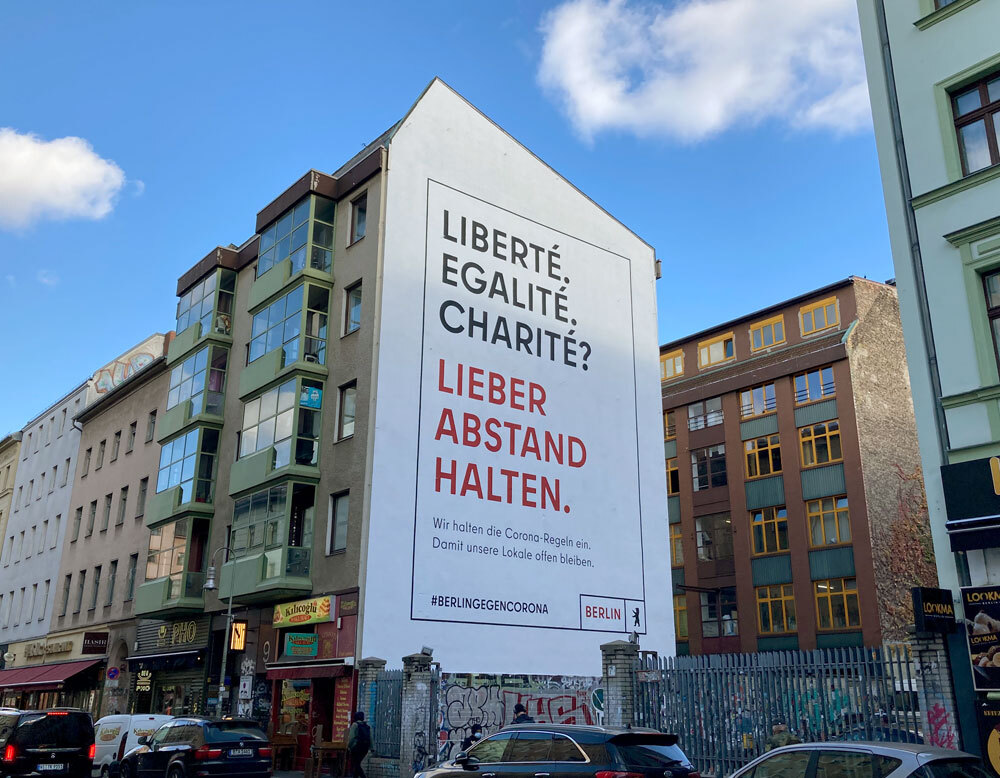 The campaign images were designed by Jung von Matt and can be found all over Berlin. 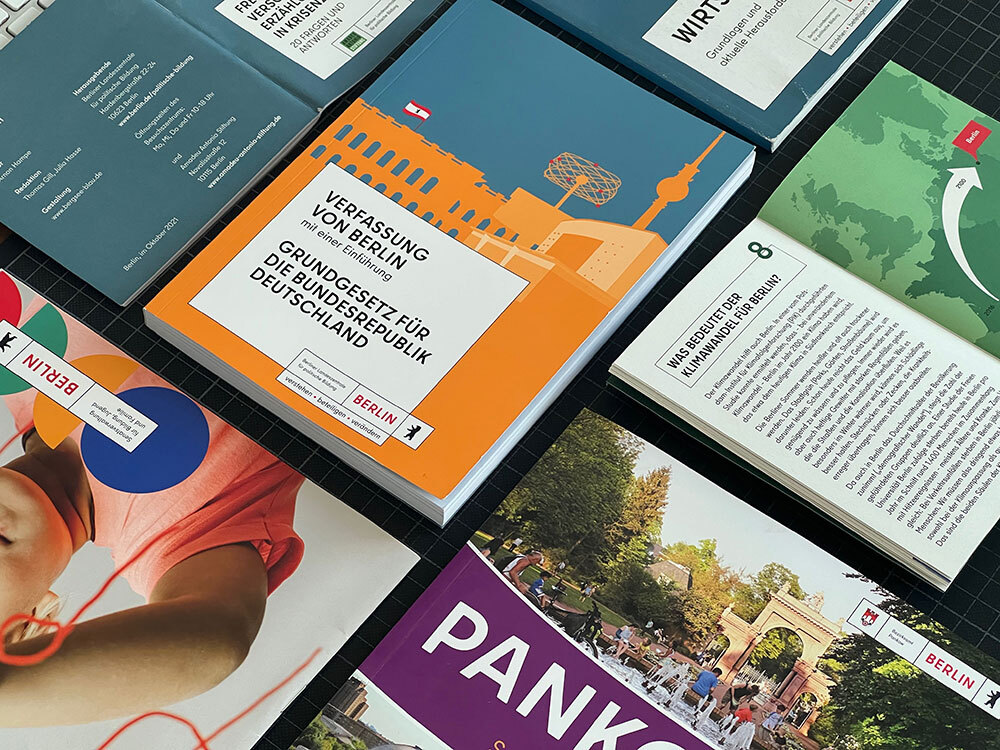 Berlin Type can also be used in editorial design. The type is highly functional and has been tested in small sizes. 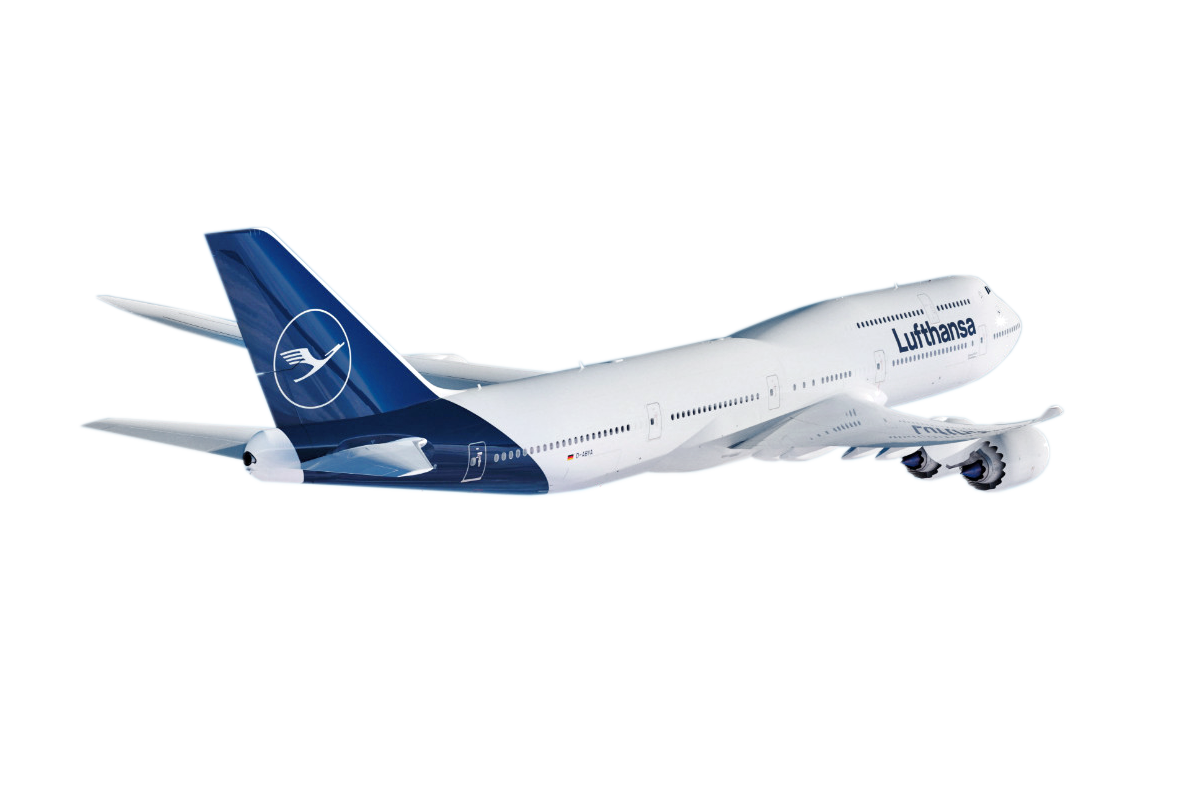